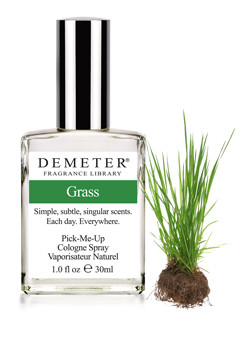 Playing in it.......lying on it......or even mowing it....Grass smells wonderful. Centipede grass, the most widely used lawn grass in the southeast United States, has something of a romantic history. Around 1918, the U.S. Department of Agriculture sent a Dr. Meyer, a plant explorer, to China in search of plants that might be economically useful. Tragically, before his return home Chinese bandits killed Dr. Meyer. His suitcases arrived in the U.S. where a collection of seeds was found, including a packet of Chinese centipede grass seeds. That packet of seed was sent to a USDA experimental station near Savannah, Georgia. In the early 1920's, Jack Renfroe took four sprigs of the grass to his father, Mr. Riley Renfroe, who had a 400 acre farm near Quitman. Three of those sprigs survived and were planted in a pasture. In 1950, Ray Jensen, a soil scientist for the USDA, visited the Renfroe farm to make a soil survey. Although 96 years old, Mr. Riley Renfroe wanted to accompany Jensen on the survey. That evening the two settled down to a wonderful southern dinner and that is when the story of the centipede grass on the Renfroe farm was told. Ray Jensen had just finished building his home on 20th Street in Tifton, Georgia. Mr. Renfroe insisted he take a pickup load home with him for his yard, where Jensen planted all the grass. The following year Jensen contracted Mr. Renfroe to produce centipede seed from the 40 acre pasture he had developed from just three live sprigs of the Chinese grass. Ray Jensen had a vision to produce and sell this wonderful grass and seed and offer it as a foundation to southern homes and businesses. From China to Washington, DC, to Savannah to Quitman to Tifton, to the entire southeast and beyond, from one small packet of seed and three live sprigs, today centipede grass can be found on lawns and ornamental turf areas around the world. In Demeterâ€™s Grass Pick-Me-Up Cologne, we have captured the freshness and sweetness of a lush green grass pasture, much like the pasture that Mr. Riley Renfroe planted with centipede grass from those three live springs over 80 years ago.

This product hasn't received any reviews yet. Be the first to review this product!